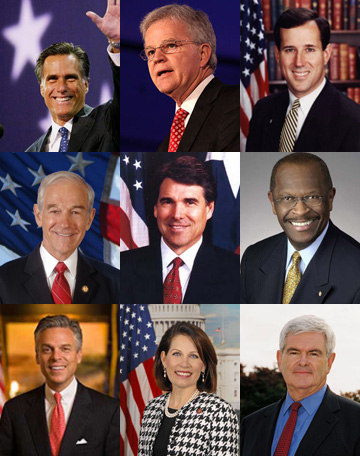 For a long time, I’ve thought that Jon Huntsman would be a formidable challenger to President Obama. I don’t claim to know a lot about him, but from what I’ve heard, he is someone who could appeal to the middle of the country. Of course, he has to make it through the “TeaPrimaries” and that is the one thing that may prevent him from ever facing President Obama in the general election. And to be honest, both he and Romney carry the religious issue around with them, so the evangelical wing of the party isn’t going to be thrilled with either of them. Republicans are pretty loyal, though and will more than likely rally around whoever is the nominee.

Even though I’ve thought that Jon Huntsman would give President Obama the best fight of any of the declared candidates, I’m not so sure he will get the nomination. The Awesome Bob Cesca thinks that Rick Perry will get the nod and makes some valid points in defense of his theory. I just seem to remember hearing too many crazy things that Perry has said in the past and that signals to me that he will self destruct along the way. His past statements may sink him. But Bob may be right. If he is, I’m sure President Obama will win in a landslide.

I guess I’ve been thinking that it will either be Huntsman or Romney that will get the nomination. The first few states may have crazy results like Perry or Paul or Bachmann (I can’t believe I just typed that :) ), but if those two can hold out past the first few states, I think the rest of the country will fall in line and pick the most reasonable candidate and to me, it’s either Romney or Huntsman. If I have to pick one over the other, I think I’ll pick Huntsman. But I know it’s a longshot.

Who do you think will get the Republican nomination in 2012 and what are you reasons why?

The comments are now open!

14 thoughts on “Who Do You Think Will Get The GOP Nomination?”