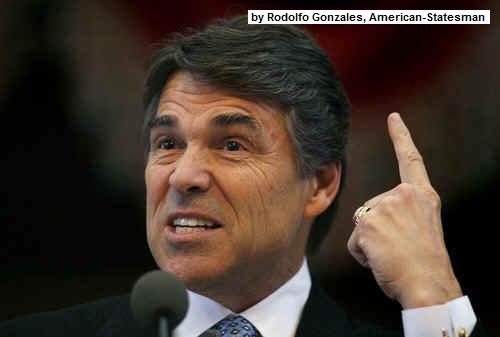 We are living in interesting political times, folks. It’s been a gradual process, but we have made it to the point in time where every political group operates within their own reality. People talk past each other constantly, there is hardly any agreement on an objective reality. Facts don’t exist anymore or at least don’t seem to matter when people form their opinions. The Republicans have been using it to great advantage over the last few years, convincing their mindless followers of their own set of “facts” and then pushing them on the masses with no push back from the traditional media at all.

The latest clown to climb aboard the Republican clown car, as Tim Pawlenty jumped off, was Governor Perry of Texas. The media are giving him his 15 minutes as we speak, but let me predict that the rats will be fleeing that ship pretty quickly. But who can predict anything these days, interesting times for sure.

Steve Benen tells us about Gov. Perry’s alternate reality as it relates to the recent debt ceiling debacle…

Ordinarily, when Republicans try to rewrite history, they tend to point to events that happened quite a while ago, which makes it easier to play on short memories. Rewriting the events of two weeks ago seems more brazen.

Texas Gov. Rick Perry is kicking off his presidential campaign with a bit of creative spin on S&P’s downgrade of the U.S. credit rating: turns out President Obama did it.

In his first and bio-heavy campaign video of his presidential campaign, Perry places the blame for the downgrade squarely on the shoulders of Obama.

As the buffoonish governor sees it, “the president’s refusal to control spending” led to the downgrade.

I know Rick Perry isn’t the only buffoon who is trying to push that idea, but he has a certain style to his buffoonishness. As with other things I’ve heard and seen about the good governor from our friend GrantInHouston and other places, he reaches new levels of absurdity. More from Steve…

This isn’t ancient history. This just happened and should still be fresh in everyone’s memory.

Perry’s attack, by the way, comes the same day as the governor downplayed the threat of default. The irony is astounding: S&P downgrades our debt because far-right Republicans didn’t take default seriously; Perry announces he agrees with those far-right Republicans; Perry then holds Obama responsible for the S&P decision.

I know I’ve used this line many times before, but Richard Pryor said it best, “Who you gonna believe, me or your lying eyes?”