This is a blast from the past that I dug up in honor of Dylan Ratigan praising the blatantly racist Andrew Breitbart on his show today. You know, Arianna Huffington’s buddy and co-founder of her sell out rag. Twitter lit up this afternoon during the show as everyone wondered what in the hell is Ratigan doing. I think most know that Ratigan is not a liberal or anything close to a liberal. Doesn’t he look like every bully from every school yard you’ve ever been on. Enjoy this oldie but goodie, I’m heading to a Jeff Beck concert. 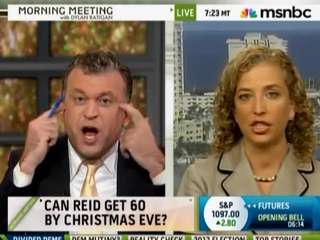 Yesterday I posted about Dylan Ratigan’s rant on Morning Joe where he referred to President Obama as a “little boy” and made a reference to him bending over for Wall Street. I commented on many “progressive” blogs about what I had heard and put up a post on this blog. I googled it shortly after I posted and found my post right there at the top of Google’s results. I thought to myself, woe…no one else caught that or if they did, they didn’t think anything of it? W.E.E. See You picked it up and did a post with the video of it. All day long I kept checking the big blogs and nothing, no mention of what I think were incredibly offensive comments towards our president. Not just the “boy” reference, a code word from days gone by, but the lack of respect for the office of the president itself. What a huge insult to the leader of the free world and what it stands for. I wondered if I was the only one who had seen it, are Morning Joe’s ratings so low now that no one is actually watching it? It is the lowest rated morning show on TV, you know?

Now imagine if Rush Limbaugh had said that. What do you think Media Matters would have all over their front page? Daily Kos? Huffington Post? TPM? Why has Dylan Ratigan been given a pass? Is it because he works for MSNBC, the Fox News of the left (according to some, not me)? I certainly had a lot of hits yesterday because of my post, I think it is because so many people saw it and were wondering where the outrage was and Jonathon Capehart linked to my blog as an example of Dylan “getting smacked around”, poor poor Dylan.

Now don’t get me wrong, I support my fellow leftie bloggers for the most part, a few exceptions, but I can’t believe they are ignoring this and letting Ratigan get away with it. His form of populist ranting is the worst kind, you might notice how he keeps reminding us throughout his rants that he is just representing the masses. It’s very subtle, but if you look at a transcript of what he says, he constantly drops in those populist cues. It’s very much a brainwashing technique, ala the Republican spin-meisters. Notice how he makes a general statement that most everyone can agree with, then he sprinkles in his supply-side economics propoganda and then returns to a populist statement. Since the bullshit is couched between two reasonable statements, well then the bullshit must be true too.

I’m not done with Ratigan either, stay tuned for more analysis of this wolf in sheep’s clothing.